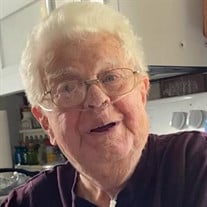 TOWNSEND-Donald J. Tangney, 87, of Townsend, died peacefully on Monday, September 6, 2021, in the Life Care Center of Leominster after a period of declining health. Don was born in Worcester on March 25, 1934, a son of the late Bartholomew and Ellen (Brosnan) Tangney. He grew up on Vernon Hill in Worcester and graduated from St. John’s High School in 1951. He received both his bachelor’s and master’s degrees in education from Fitchburg State College. Don was a well-respected member of the Fitchburg community, working for over 30 years in the public school system- first as a teacher and principal, and then as the first Director of Special Education, retiring in 1997. His work left a lasting impact on the students and families of Fitchburg. Don lived life to the fullest. He loved his Irish heritage and was an active member of the Fitchburg Irish American Club. He loved to play golf and throw darts, playing both sports in local leagues for many years. He loved singing, dancing, and relaxing with a good book. He especially loved Cape Cod, where he spent time with family- swimming, fishing, boating, biking, and sailing. He is predeceased by his beloved wife of 54 years, Donna I. (Nelson) Tangney, who died in 2012. He leaves three daughters, Gayle A. Irwin and her husband Jeffrey of Townsend, Diane I. Fortier and her husband Maurice of Manchester, NH; and Martha Ellen Tangney of Townsend; three grandchildren, Christopher Irwin, Elizabeth Irwin, and Michael Irwin and his wife Joan, and one great-granddaughter, Sydney Rose Irwin, as well as many cherished nieces and nephews. In addition to his wife, he was predeceased by one brother and four sisters. His funeral services will be held on Sunday, September 12, at Emanuel Lutheran Church, 1200 John Fitch Highway, Fitchburg. A Calling hour will be held in the church prior to the funeral service from 3 to 4 pm. For those who wish to stay, the service is scheduled for 4:00 pm, with a reception following in the church hall. Burial will be in Riverside Cemetery, Townsend on a later date at the family’s convenience. The service will be live-streamed at https://youtube.com/channel/UCgDhVy39M_2gvF3m7dulDCw In lieu of flowers, memorial contributions may be made to the Emanuel Lutheran Church Memorial Fund, 1200 John Fitch Highway, Fitchburg, MA 01420, or to a charity of one’s choice.

TOWNSEND-Donald J. Tangney, 87, of Townsend, died peacefully on Monday, September 6, 2021, in the Life Care Center of Leominster after a period of declining health. Don was born in Worcester on March 25, 1934, a son of the late Bartholomew... View Obituary & Service Information

The family of Donald J. Tangney created this Life Tributes page to make it easy to share your memories.

Send flowers to the Tangney family.