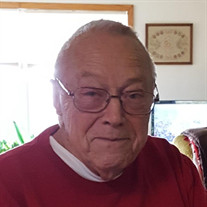 FITCHBURG: Donald E. Marble, 93, a former longtime resident of Scott Road in Fitchburg, died Saturday, May 22, 2021 at Mercy Medical Center; Cedar Rapids, Iowa. Don was born on October 21, 1927, and lived in Fitchburg for much of his life before moving to Iowa about six years ago. He was one of four children born to Harry and Clara A. (Butler) Marble. During WWII and the Korean Conflict, Mr. Marble served his country in the Merchant Marines from 1944 to 1945, and later in the United States Marine Corps from 1945 to 1952. Following his discharge from the military, Mr. Marble began a career spanning over three decades as a police officer in the City of Fitchburg. Don was a member of St. Joseph’s Church and the St. Joseph Club; and later in life, he and his wife frequently volunteered at the Fitchburg Senior Center. He leaves his son and daughter in law, Scott and Diane Marble of Chattanooga, Tennessee; his daughter, Lynn Marble–Riechers and her husband, Randy, with whom he resided in Independence, Iowa; 8 grandchildren and 13 great-grandchildren. Don’s wife of 64 years, Theresa G. (Leger) Marble, died in October 2012. He was also predeceased by his siblings, Robert Marble of California; Harry Marble and Leonore Gooding both of Maryland; and a son, Donald Marble Jr., of Fitchburg. Although Pepere, as he was known to family and friends, didn’t receive his high school diploma until he was in his seventies, he never failed to emphasize the importance of education and hard work to his children. A quiet and humble man, his actions spoke volumes. Frequently working three jobs at a time to pay for private school and college tuition, Don sacrificed mightily of what he had to make dreams a reality for the next three generations of his family. Funeral services will be held 11:00 am, Friday, May 28, 2021 at Isabelle & Anderson Funeral Home; 316 Clarendon Street; Fitchburg, followed by interment with military honors at St. Joseph’s Cemetery, Fitchburg. Memorial contributions may be made to the Boston Children's Hospital; 300 Longwood Avenue; Boston, MA 02115 for the care and treatment of brain injured children.

FITCHBURG: Donald E. Marble, 93, a former longtime resident of Scott Road in Fitchburg, died Saturday, May 22, 2021 at Mercy Medical Center; Cedar Rapids, Iowa. Don was born on October 21, 1927, and lived in Fitchburg for much of his life before... View Obituary & Service Information

The family of Donald E. Marble created this Life Tributes page to make it easy to share your memories.

Send flowers to the Marble family.