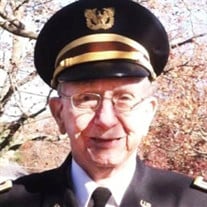 Shirley: Donald Keith DeLaite, 92, died on January 9, 2019 at his home in Largo Florida after many years of declining health. His final wish was to return to Florida one last time. His family honored that wish and although he wasn’t able to enjoy the entire winter, he was content to be in the place he loved. For the past 35 years he made his home in Florida during the winter months and Shirley and Owls Head, Maine the rest of the year. He was born in Kingman, Maine on October 9,1926 to Arthur and Evelyn Sharpe DeLaite. He spent his early years in Kingman and later moved to Rockland, Maine where he met his wife, Emily (Molloy) DeLaite. He graduated from Rockland High School in 1944 and was drafted into the US Army to fight in World War II. Upon his return from the war he married the love of his life, Emily, on June 18,1948. He re-enlisted in the Army in 1950 to fight in the Korean War. He served his country for another 18 years, retiring as a Chief Warrant Officer 4 in 1968, having served a total of 23 years. He was awarded many commendations during his years of service including a Bronze Star, Army Commendation Medal, WWII Victory Medal, Korean War Service Medal, and the Philippine Liberation Medal. He retired in 1968 at the former Fort Devens. He was always proud of having served his country and was a soldier until the end. Upon his retirement he continued to serve his community on the Town of Shirley Finance Committee and later as the Shirley Town Clerk, a position he held for 14 years until he retired in 1986. He believed in serving the community in which one lived and passed this on to his children. In addition to his wife of 70 years, he is survived by daughters Deborah DeLaite and husband Ronald Marchetti; Desiree Monaco and husband Donald, all of Shirley, MA; and a son, Brian DeLaite and wife Kathy of Wyckoff, NJ. He also leaves grandchildren Daniel Monaco and partner Sarah Smith; Katherine Monaco and partner Ronald Gardner; Michael Marchetti and wife Samantha; Liam, Lila, Emily and Carly DeLaite. He also leaves great-grandchildren Kaycee Sullivan and Ronald (RJ) Gardner. He is survived by his sister Ruth McIntyre of Jamestown, RI; sisters-in-law Margaret Ciolfi of Rockport, Maine, Dorothy Murray of Rockland Maine and brother-in-law Thomas Molloy of Rockland, Maine. He was predeceased by son William Keith DeLaite, brother William DeLaite and sister Frances DeLaite. He also leaves behind many nieces and nephews. He loved spending time with his family and especially enjoyed the many lobster-eating get togethers. The family would like to extend its sincere appreciation to Nashoba Nursing Service Hospice and Suncoast Hospice. Their compassion and care were excellent. His life will be celebrated at a funeral Mass at 11 Am Thursday, January 17th at St. Anthony of Padua Church, 14 Phoenix Street, Shirley. Spring burial with military honors will be at Village Cemetery, Shirley. There are no public calling hours. In lieu of flowers the family requests that you consider a donation to the Wounded Warriors Project, Shirley Friendship Fund or American Heart Association. The Anderson Funeral Home, 25 Fitchburg Rd., Ayer is assisting the family with arrangements.

Shirley: Donald Keith DeLaite, 92, died on January 9, 2019 at his home in Largo Florida after many years of declining health. His final wish was to return to Florida one last time. His family honored that wish and although he wasn&#8217;t able... View Obituary & Service Information

The family of Donald K. Delaite created this Life Tributes page to make it easy to share your memories.

Send flowers to the Delaite family.