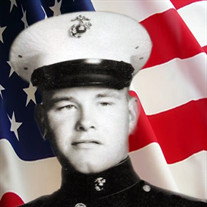 TOWNSEND; Dennis J. Murphy, 79, of Townsend, died Tuesday, March 17, 2020 at Health Alliance – Leominster Hospital. Mr. Murphy was born in Bronx, NY, June 2, 1940 the Son of Joseph and Gertrude (Kennedy) Murphy and has resided in Townsend for over 25 years. During the early 1960’s Mr. Murphy served his country in the United States Marines and was on duty and stationed at President John F. Kennedy’s Inauguration. After beginning his career in the construction industry, Mr. Murphy went to work as a letter carrier for over twenty years for the US Postal Service in Waltham, retiring in 2001. He was a member of the Semper Fi Society, Knights of Columbus and the Townsend Rod & Gun Club. He was also a member of the Marine Corps League of Watertown, Massachusetts . He was also a member of St. John’s Church in Townsend. He leaves his wife of 38 years, Penny (Aucoin) Murphy; three sons, Michael P. Murphy, Dennis J. Murphy, Jr., Joseph D. Murphy all of Townsend; a daughter, Erin K. Murphy of Townsend and a sister, Clare Murphy of Manhattan, NY. He was predeceased by his sister, Rosanne Svede of Philadelphia. Due to the COVID-19 Pandemic Funeral services will be held privately. The Anderson Funeral Home, 250 Main Street, Townsend Center is assisting the family with arrangements. For additional information or to leave an on line condolence, please visit their website at www.andersonfuneral.com

The family of Dennis J. Murphy created this Life Tributes page to make it easy to share your memories.

Send flowers to the Murphy family.