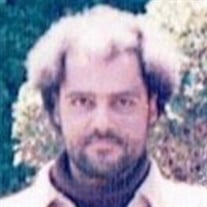 AYER: Sunday, Feb 6: This Morning David "Ralph" McMillan, 73, passed away quietly at the River Terrace Care facility located in Lancaster. Family was in attendance. Mass. Ralph was born in 1948 into a Military family stationed in Heidelberg Germany, David Ralph McMillan was the Son of Sgt. David L. McMillan and Lilo “Liselotte” McMillan, formerly of Ayer and both of whom predeceased him. "Ralph", as he was known to friends and family, suffered from Schizophrenia which he battled for more than fifty-four years. Prior to the onset of this devastating disease, Ralph excelled in science placing first in the Massachusetts State High-School Science Fair, for two consecutive years. He was an Eagle Scout and a camp counselor at Camp Wanocksett, NH. David Ralph McMillan was a 1967 Graduate of Lawrence Academy of Groton, MA. He attended Northeastern University for a year before succumbing to the ravages of Mental Illness. Ralph's Mother, Lilo McMillan, was a well-known crusader for improved treatment of Mentally Ill persons, while she served on the board of the National Alliance for the Mentally Ill, NAMI, and as President of the Mass. Alliance for the Mentally Ill. Lilo was appointed by two Governors to the State Advisory Committee for Mental Health. Ralph's Father, David L. McMillan, died in 2006, was a popular Army Retiree who was active locally in church as well as a Masonic lodge in Ayer. Ralph loved to listen to music from the 1960s and 1970s on LP records. He played the piano very well and for a while played the organ at church services held for prisoners incarcerated at the Stockade at Fort Devens. Ralph had a passion for motorcycles, sports cars and travel. Despite his illness, Ralph had a kind heart and a wonderful sense of humor and particularly liked puns. He is survived by his brother Frederick McMillan and Sister-in-Law Marilyn “Leighton” McMillan, both of Ayer, as well as his nephew, Tyler McMillan, of Haverhill. Fred, Marilyn, and Tyler McMillan remained close to Ralph throughout the last three decades of his life. The family of David Ralph McMillan believe that his soul has finally been released from his damaged earthly body and from the Mental Illness which so greatly compromised his ability to think, live normally, or possibly even excel in life. Private memorial services will be announced and held in late Spring. Donations may be made in memory of David Ralph McMillan and Lilo McMillan to: The Nationally Alliance for the Mentally Ill of Massachusetts (NAMI-MA) https://namimass.org/donate/ The Anderson Funeral Home, 25 Fitchburg Rd, is assisting the family with the funeral arrangements. For further information or to leave an online condolence please visit their website at www.andersonfuneral.com.

AYER: Sunday, Feb 6: This Morning David "Ralph" McMillan, 73, passed away quietly at the River Terrace Care facility located in Lancaster. Family was in attendance. Mass. Ralph was born in 1948 into a Military family stationed in Heidelberg... View Obituary & Service Information

The family of David "Ralph" McMillan created this Life Tributes page to make it easy to share your memories.

Send flowers to the McMillan family.