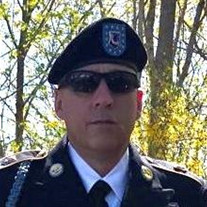 AYER: Daniel E. Picard, 53, of Ayer, MA., formerly of North Brookfield and Farmington, ME, passed away Thursday, December 26th, 2019 at at his home in Ayer, MA surrounded by his family. Dan was born in Waterville, ME, October 24, 1966, a son of Francis T. Picard and Valerie L. (Poulin) Hooper and grew up in Farmington, ME. He resided fifteen years in North Brookfield before moving to Ayer a year ago. He was a graduate of Mt. Blue High School in Farmington and received a Bachelors Degree from Liberty University. "I've been given many names in my lifetime but Papa is my favorite." Dan Picard. Danny loved spending time with his family above all things, one of his favorite things to do was playing monopoly with the grandkids. He also loved hiking any and every mountain he could find. He successfully completed The Appalachian Trail, from February 14th to June 30th 2017, hiking from Georgia to Maine. At the age of 4 Danny told his mom he'd like to jump out of planes like he'd seen on tv and so he did. He joined the active army at the age of 17 where he was a paratrooper, ranger and part of the 181 Infantry Battalion. He served his country for thirty three years in the United States Army retiring in 2017 at the rank of Command Sergeant Major. He leaves his wife, Luanne I. Francis Picard; two daughters, Pamela M. Picard of Livermore Falls, ME, Megan A. Picard of Industry, ME; two brothers, Dana Picard of Pittsfield, ME, Larry Picard of Auburn, ME; two sisters, Michelle Rose of OK, Olivia Hooper-Downer of MN; five grandchildren, Christina Chick, Issac Chick, Owen Chick, Emmaly Sandakli and Buddy Sandakli. Mr. Picard’s family will receive family and friends from 4:00 PM - 7:00 PM Wednesday, January 8th, 2020, at the Anderson Funeral Home, 25 Fitchburg Rd., (Rte 2A) Ayer, MA. Family and friends in Maine are invited to visit from 1:00 p.m. to 3:00 p.m., Friday, January 10, 2020, at Burpee, Carpenter & Hutchins Funeral Home, 110 Limerock Street, Rockland, ME, where a funeral service with Military Honors will be held at 2:00 p.m., Saturday, January 11th.

AYER: Daniel E. Picard, 53, of Ayer, MA., formerly of North Brookfield and Farmington, ME, passed away Thursday, December 26th, 2019 at at his home in Ayer, MA surrounded by his family. Dan was born in Waterville, ME, October 24, 1966, a... View Obituary & Service Information

The family of Daniel E. Picard created this Life Tributes page to make it easy to share your memories.

Send flowers to the Picard family.