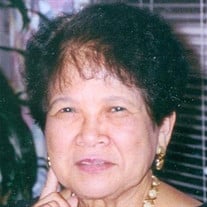 Shirley: Concepcion E. “Connie” (Estudillo) Tung, 93, of Shirley, died Thursday Morning, September 6, 2018 at her home. Connie was the widow of SFC Earl R. Baxter who was killed in Action in the Korean Conflict in 1950 and the wife of Samuel Tung who died in 1999. Mrs. Tung was born in Manila, Philippines, January 17, 1925, the eldest of 8 children born to Pacifico and Rosario (San Victores) Estudillo and has resided in Shirley for nearly 70 years. She was a member of St. Anthony’s Church and the American Legion Auxiliary. Connie was an accomplished bowler and competed in bowling leagues in Leominster and Harvard where she won many awards. She also enjoyed reading, traveling and working in her garden. She leaves two sons, Earl Baxter, Jr. and Richard Tung both of Shirley; two daughters, Ginny B. Blackwolf of Gloucester, Eileen Phillips of Leominster; 12 grandchildren, 12 great grandchildren and 2 great great grandchildren. She also leaves a host of relatives and friends from her Filipino homeland. In 2001 she was predeceased by her daughter, Alice Baxter-Cameron of Florida. Mrs. Tung had worked as an inspector at Digital Equipment Company in Maynard and later at at the George S. Carrington Company in Leominster until her retirement in 1980. A Funeral Mass will be celebrated 10 Am Friday, September 14th at St. Anthony's Church, 14 Phoenix Street, Shirley. Burial will be private. The Anderson Funeral Home, 25 Fitchburg Rd. Ayer is assisting the family with arrangements. There are no calling hours. Memorial contributions may be made to Shirley American Legion Post # 183, 8 Church Street, Shirley, MA 01464.

The family of Connie E. Tung created this Life Tributes page to make it easy to share your memories.

Send flowers to the Tung family.