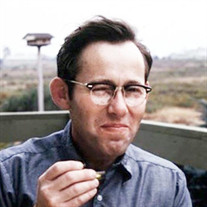 TOWNSEND: Clifford E. LaCount, 91, formerly of Townsend, died peacefully Tuesday, November 24, 2020. He was the husband of Irene (Owen) LaCount died in 2015 and Maude Weldon who died in 1983, and the brother of Clarence LaCount who died in 2001. Mr. LaCount was born in Manset, Maine, February 1, 1929 a son of Herbert and Louise (Johnson) LaCount and resided in Townsend for over 40 years. For three years during the Korean Conflict, Mr. LaCount served his country in the United States Army. He was a 1947 graduate of Southwest Harbor High School, Southwest Harbor, Maine and continued his education at Northeastern University in Boston, where in 1966, he received a Bachelors Degree in Industrial Technology. Throughout his career Mr. LaCount worked for several corporations including NASA on the Apollo 13 Space Mission, Wang Laboratories, RCA, General Electric and Sylvania before retiring from Setra Systems in Boxboro in 2000. He enjoyed riding his Kawasaki 900 Motorcycle and was a member of the American Motorcyclist Association. He attended the Townsend Congregational Church. He leaves five daughters, Atty. Susan Edgett of Groton; Nancy Jackvony of Ayer; Marci Carson of Pensacola, FL; Katherine LaCount of Shrewsbury; and Joyce Shultz of Ayer; a stepson, George Winkle of Woburn; two stepdaughters, Elizabeth Hooper of West Groton; and Patricia LaRose of Pittsfield; 25 grandchildren and several great-grandchildren. A graveside service with military honors will be 11am Saturday, November 28, 2020 at Groton Cemetery, Chicopee Row, Groton, MA. The Anderson Funeral Home, 250 Main Street, Townsend Center is assisting the family with arrangements. For additional information or to leave an online condolence, please visit their website at www.andersonfuneral.com.

TOWNSEND: Clifford E. LaCount, 91, formerly of Townsend, died peacefully Tuesday, November 24, 2020. He was the husband of Irene (Owen) LaCount died in 2015 and Maude Weldon who died in 1983, and the brother of Clarence LaCount who died in... View Obituary & Service Information

The family of Clifford E. LaCount created this Life Tributes page to make it easy to share your memories.

Send flowers to the LaCount family.