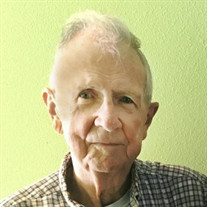 AYER: Charles F. Taylor, 95, of Groton, a longtime resident of Ayer and Florida, died Wednesday, February 3, 2021 at his home. Mr. Taylor was born in Providence, Rhode Island December 13, 1925 a son Charles and Irene (Donaghue) Taylor and was a graduate of La Salle Academy in Providence, RI. Following his graduation from high school Mr. Taylor served his country during WW II in the United States Army Air Corps and served again during the Korean Conflict in the United States Air Force. After serving in the armed forces, Mr. Taylor went to work in the tool room at Raytheon Corporation in Waltham. While there he studied professional engineering at Wentworth Institute in Boston and later graduated from Lowell Technical Institute in Lowell with his degrees in Mechanical and Manufacturing Engineering. He worked as an engineer for Raytheon Corporation for over 35 years retiring in 1987. Following his retirement, Mr. and Mrs. Taylor wintered for thirty years in several different communities in Florida including Citrus Springs, Crystal River and Beverly Hills. An avid marksman, Mr. Taylor was a member of the Ayer Gun & Sportsman’s Club, Harvard Gun Club, Ayer Knights of Columbus and the Ancient Order of Hibernians. He had attended Sacred Heart Church in Groton and enjoyed golfing. He leaves his wife of 76 years, Doreen E. (Hodgson) Taylor; two sons, Dale G. Taylor, Timothy S. Taylor both of Ayer; three daughters, Bonnie L. Bushnoe of Townsend, Doreen Pratter of Ft. Worth, TX, Charlene Pelletier of Orange; 10 grandchildren and 12 great grandchildren. He was the brother of the late Robert Taylor and Betty Caccia both of Providence, RI. Services will be held private at St. Ann’s Cemetery. The Anderson Funeral Home, 25 Fitchburg Rd., Ayer is assisting the family with arrangements.

The family of Charles F. Taylor created this Life Tributes page to make it easy to share your memories.

Send flowers to the Taylor family.