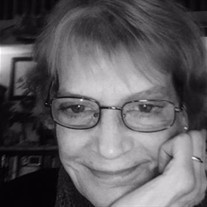 Catherine “Cathy” Tlumacki Callahan passed away peacefully at home in Shirley, MA on November 11, 2019. Formerly of Wakeﬁeld, RI, she was born in Boston on January 22, 1950 to Michael and Margaret Tlumacki. Cathy grew up on the grounds of the Carroll School in Lincoln, MA, formerly the Storrow Estate, where her father ran the maintenance department for many years. She graduated from Lincoln-Sudbury High School and received her undergraduate degree from Boston University. She became an educator and eventually the head of the Math Department at the Carroll School where she would teach for nearly three decades. Cathy devoted her entire career to helping students with learning disabilities and other challenges. As a young woman, Cathy was adventurous and outgoing. In August of 1969 she, along with thousands of other college-aged people, headed for a three-day music festival in upstate New York. She didn’t know it at the time, but her future husband, Timothy Callahan, was also at Woodstock. They wouldn’t meet until a year or so later when they were both traveling through South America. Eventually Cathy and Tim settled in Bogota, Colombia for an extended stay. In 1972, after returning to the US, the couple married in the gardens of the Carroll School. Cathy was endowed with an extraordinary singing voice and was often called upon to perform at family and community events. Her cooking skills were unsurpassed and her contributions to family holiday meals will be sorely missed. When given an opportunity, Cathy could also transform a hardscrabble patch of dirt into a beautiful and tranquil garden oasis. A self-proclaimed Earth Mother, Cathy lived up to the name by welcoming young people from all over into her home for a day, a week, or as long as they needed. Among her children’s friends she was indeed a second mother. Preceded in death by her parents several years ago, and more recently her husband in 2018, she is survived by her daughter and son-in-law Annya and Dave Pedreschi of Shirley, her son Patrick Callahan of Osterville, MA and ﬁve grandchildren; Anna Pedreschi, Jack Pedreschi, Eoin Pedreschi, Maisie Callahan and George Walter Callahan. Also surviving are siblings Peter (Janet) Tlumacki of Hartland, VT, Michelle “Mickey” (Gilbert) Stone of Maryville, MO, and Mark (Leslie) Tlumacki of Wakeﬁeld, RI; her father-inlaw George Callahan of Shirley; brothers-in-law George (Mary) Callahan of Carver, MA, Mark Callahan of Shirley and Peter Callahan of San Francisco, CA; sisters-in-law Linda Callahan of Yarmouth, MA, and Elizabeth “Betts” Callahan of Homer, AK; as well as numerous nieces and nephews from New England to Alaska. There will be a celebration of her life at the Shirley Meeting House on Tuesday, November 19th at 2 PM. Following the service, family and friends are invited to gather at the Bull Run Restaurant in Shirley to raise a glass and have a nosh in Cathy’s memory. In lieu of flowers memorial contributions may be made to the Children of Fallen Patriots; www.fallenpatriots.org

The family of Catherine “Cathy” (Tlumacki) Callahan created this Life Tributes page to make it easy to share your memories.

Send flowers to the Callahan family.