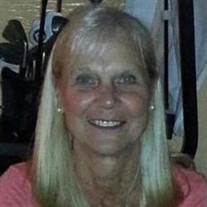 TOWNSEND: Carol A. (Mahoney) Van Sciver, 69, a resident of Townsend for over thirty years, passed away peacefully on Saturday, May 22, 2021 at Rose Monahan Hospice Home in Worcester. Born in Goshen, NY on October 4, 1951, she was the daughter of the late John and Marie (Heinzelman) Mahoney. She was raised in Goshen, where she graduated from Goshen High School with the Class of 1969. Following graduation, Carol began her career with Sears where she eventually rose to the position of Manager. Carol married her beloved late husband Kenneth R. Van Sciver on February 16, 1979. She devoted her life to raising her children, leaving her career when the family moved to Massachusetts in 1988. The couple was happily married for over 35 years when Kenny passed away in November 2014. Carol enjoyed taking trips every fall to Myrtle Beach, South Carolina and to her second home on the New Jersey Shore. Like her late husband, she was a passionate New England sports fan. Most of all, Carol loved being surrounded by her family. Her greatest joy was her grandchildren, and she treasured each moment she got to spend with them. Carol will be remembered by her family as a devoted wife, mother and grandmother. Beloved wife to her late husband, Kenneth R. Van Sciver. Loving mother of two daughters, Whitney L. Van Sciver and her husband Jeffrey Ford of Walpole and Brooke M. Chamberland of Townsend; sister of John (Christine) Mahoney of Middletown, NY, Nancy Mahoney and Robyn (Matt) Grant, both of Egg Harbor Township, NJ, and the late Joan Mahoney of Pine Island, NY; cherished Grammie/Gigi to four grandchildren, Jackson Chamberland, Connor Chamberland, Owen Ford and Claire Ford. She is also survived by several nieces and nephews. Mrs. Van Sciver’s family would like to thank her care teams at both Beth Israel Deaconess Medical Center and Rose Monahan Hospice Home for their wonderful care afforded to Carol during her illness. At the request of Mrs. Van Sciver’s family, all services will be held privately. Memorial contributions in Carol's memory may be made to the American Cancer Society, 3 Speen Street, Framingham, MA 01701. The Anderson Funeral Home, 250 Main Street, Townsend Center is assisting the family with arrangements. For additional information or to leave an online condolence please visit their website at www.andersonfuneral.com.

TOWNSEND: Carol A. (Mahoney) Van Sciver, 69, a resident of Townsend for over thirty years, passed away peacefully on Saturday, May 22, 2021 at Rose Monahan Hospice Home in Worcester. Born in Goshen, NY on October 4, 1951, she was the daughter... View Obituary & Service Information

The family of Carol A. (Mahoney) Van Sciver created this Life Tributes page to make it easy to share your memories.

TOWNSEND: Carol A. (Mahoney) Van Sciver, 69, a resident of Townsend...