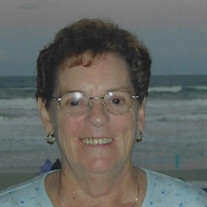 AYER: Carol R. (Picard) Decot Madigan, 84, formerly of Ayer and Deland, FL, passed away on Friday, May 14, 2021 at UMass Medical Center in Worcester. Carol was a cherished wife, mother, grandmother, great-grandmother, sister, and friend. She celebrated 13 years of marriage with her beloved husband, Edward Madigan. Carol was born in Ayer on October 19, 1936, a daughter of Walter F. and Mary (Curran) Picard. She resided much of her life in Ayer and was raised in St. Mary’s parish. She was a 1954 graduate of Ayer High School and later attended Fisher Junior College and Mount Wachusett Community College. During her career, Carol was an executive secretary and civil servant for the U.S. government for 23 years at the Intelligence School within the former Fort Devens Army Base before her retirement in 1996. Previously, she had worked in a similar capacity at the Hilltop School in Ayer for 9 years. After her retirement, Carol and Ed relocated to Deland, FL, where she worked for the city engineering department for 11 years. Carol was a lifetime member of the VFW Ladies Auxiliary, where she served as Junior Vice President and secretary in Deland. She was also a member of the Littleton-Westford Emblem Club, serving as the club’s secretary. In addition, she was a member of the American Legion Auxiliary in Shirley, MA and fulfilled the role of secretary for the club. Carol was a faithful member of TOPS Club, where she maintained her KOPS status for many years. She had volunteered for the gift shop at the Nashoba Valley Medical Center in Ayer. She enjoyed shopping and traveling to multiple destinations, including Ireland, England, Scotland, Wales, and Hawaii. Additionally, Carol adored the Boston Red Sox and having girls’ night with friends. Carol also enjoyed relaxing at various beaches in Cape Cod, New Hampshire, and Maine. She leaves and will be deeply missed by her two daughters, Kathleen M. Decot of Harvard and Nancy A. Decot of Nashua, NH. Carol is also survived by her sister, Marcia A. Sullivan of Shirley, four grandchildren, Nina Decot, Corey Decot, Sophia Decot, and Chloe Decot Cushing, and five great grandchildren, Mealofa Khourie, Alesi Khourie, Brandon Corbett, Anthony Tompkins, and Elias Tompkins. She was predeceased by her husband, Edward Madigan, who died in July 2006, and her former husband, Walter R. “Buddy” Decot, in March 2006. Carol was the mother of the late Matthew K. Decot of Groton, who died in 2001, and Mark F. Decot of Fitchburg, who passed in 2018. She was the sister of the late Thomas F. Picard of Shirley, who passed away in 2009, and Linda Ramos of Ayer, who passed in January of this year. Carol’s family will receive family and friends from 4:00 to 7:00 P.M. on Wednesday, May 19 at the Anderson Funeral Home, located at 25 Fitchburg Road (Rte 2A) in Ayer. Please visit their website at www.andersonfuneral.com for additional information or to leave an online condolence. Her funeral Mass will be celebrated at 10:00 A.M. on Thursday, May 20 at St. Mary’s Church, which is located at 31 Shirley Street, Ayer. Carol will be buried with her devoted husband Ed in the Arlington National Cemetery in Arlington, VA.

The family of Carol R. (Picard) Decot Madigan created this Life Tributes page to make it easy to share your memories.