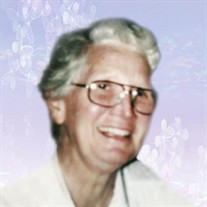 HARVARD; Barbara E. (Adams) Henderson, 87, of Harvard, formerly of Groton, passed away on Saturday, May 30, 2020 at RiverCourt Residences, West Groton from complications of COVID-19. Barbara was born in Washington, DC, on October 4, 1932, the daughter of Clifton K. and Elizabeth M. (Woodward) Adams. Her father served in the US Navy and was stationed in various parts of the United States, and internationally including China. The family moved to Belmont, Massachusetts in the 1950’s where Barbara graduated from high school. Barbara attended Lesley College (now Lesley University) in Cambridge, Massachusetts where she earned a Batcheler’s degree in Early Childhood Education. She financed her college education working as a switchboard operator at the telephone company. Following graduation, she traveled Europe with a youth bicycle touring group. Barbara began her career teaching at the Perkins School for the Blind. She loved children and taught pre-school and elementary students for many years. One of her favorite teaching jobs was directing a pre-school arts class in West Groton in the 1970’s. She was a member of the National Association of the Education of Young Children where she was actively involved in the Massachusetts chapter. She met Warren Henderson through mutual college friends and were married in 1959. They raised four children together while residing in Acton, Groton, and eventually retired in Harvard where they lived for the past 30+ years. Barbara was an avid gardener. Her vegetable gardens grew to include flowers and fruits, which she raised organically. She passed on the love of plants and gardens to her children. She was an early supporter of food coops and was actively involved in several over the years. She and her husband were active members of the Harvard Unitarian Universalist Church for many years. She was involved in many church activities and programs including the Women’s Alliance, the Bell Choir, Loaves and Fishes food pantry, and teaching Sunday school. She loved the Mummers Play, the annual auction, and the Sunday morning fellowship. Barbara is survived by two sons, Keith S. Henderson and his wife, Michelle of Ayer; Stan R. Henderson and his wife, Robin of Chelmsford; two daughters, Gail L. Henderson-King and her husband, Daniel of Shelburne, VT; and Lynne V. Henderson Searle and her husband, Keith of Pepperell; three grandchildren Benjamin King, Travis Henderson, Eric Searle and his wife, Jessica and two great grandchildren, Conrad and Corbin Searle. She is also survived by her sister, Karen Matteson of Bath, NY. She is predeceased by her husband Warren who recently passed away May 10, 2020; her parents; her brother Clifton P. Adams Jr. of South Carolina; and sister Mildred Brydon of Grafton, New Hampshire. Due to restrictions imposed by the current health crises, no service is planned at this time. A Memorial Service will be scheduled at a later date. Contributions in Barbara’s name may be made to Loaves and Fishes, 234 Barnum Rd, Devens, MA 01434 or the Harvard Unitarian Universalist Church, 9 Ayer Road, Harvard, MA 01451. The T.J. Anderson & Son Funeral Home, 25 Fitchburg Rd. Ayer is assisting the family with the funeral arrangements.

HARVARD; Barbara E. (Adams) Henderson, 87, of Harvard, formerly of Groton, passed away on Saturday, May 30, 2020 at RiverCourt Residences, West Groton from complications of COVID-19. Barbara was born in Washington, DC, on October 4, 1932,... View Obituary & Service Information

The family of Barbara E. (Adams) Henderson created this Life Tributes page to make it easy to share your memories.

Send flowers to the Henderson family.