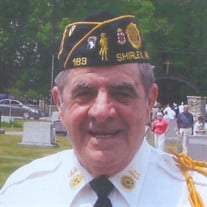 SHIRLEY: Antonio Phillip Cosenze, 91, of Shirley, passed away Sunday, March 6, 2022 surrounded by his loving family. He is survived by his children, Carolyn LaRoche of Shirley, John Cosenze of Ijamsville, MD, Michael Cosenze of Shirley, his daughter Camille Farrar and son-in-law Cory Farrar of Shirley, his grandchildren; Anthony Cosenze and his wife Claire of Framingham, Michael Laroche and his wife Lauren of Princeton, Lauren LaRoche of Shirley, Michelle Toomey and her husband Steve Toomey of Lunenburg, Alex Cosenze and husband John Harvey of Ft. Washington, MD; Nicholas Cosenze of Shirley, Zackary Cosenze of Hampstead, NC; Ashley Farrar of Pepperell, Jillian Farrar of Shirley, Ryan Farrar of Shirley and Sean Farrar also of Shirley; his great grandchildren; Collin Toomey of Lunenburg, Brooklyn Hamblin of Princeton, Theodore Cosenze of Framingham, Scarlet Toomey of Lunenburg, Eleanore Cosenze of Framingham, Jackson LaRoche of Princeton and Reagan Dufresne of Pepperell; his sister Anna CoWallis and her husband Bob CoWallis of Bangor, Maine, his brother-in-law Albert Deveau Sr. of E. Millinocket Maine, his sister-in-law Cathy Cosenze of Old Town, Maine, his brother-in-law Georg Wollenschlager and his wife Helga and his brother-in-law Peter Wollenschlager and his cousin Nevia Wollenschlager, all of Nurenburg, Germany. He also leaves many nieces, nephews and great nieces and nephews. He is predeceased by his loving wife of 62 years, Kathe (Wollenschlager) Cosenze, his son-in-law Raymond LaRoche Jr, his sisters Loretta Deveau and Flora Cosenza and his brother Rudy Cosenze. Tony was born and raised in Millinocket, Maine, the son of Italian immigrants Gabriel Cosenza and Maria (Maione) Cosenza. Tony attended Stearns High School Class of 1950 where he lettered in football, basketball, wrestling and baseball. After graduation, Tony attended the University of Maine from 1951-1953. He joined the US Army in 1954 and was assigned to the 101st Airborne Rangers and was eventually transferred to Merrill Barracks in Nurenburg, Germany where he met the love of his life, Kathe. Tony is a decorated veteran of the Vietnam War, having received many Medals including the Bronze Star Medal, Meritorious Service Medal, Army Commendation Medal, Vietnam Service Medal, Vietnam Cross of Gallantry Medal and Vietnam Campaign Medal. Upon retiring from the US Army in 1976, Tony and his family moved to Shirley where he was an active member in Shirley community. He was a very active member of the American Legion Post 183, where he served as Commander twice and Executive Board member for many years. He was also an avid gardener and was somewhat famous for his tomatoes and also his ability to diagnose and fix any issues with any plant he saw. He was also an avid pistol shooter and held the title of Marksman. He was also famous for his perfect 300 scores at Wii Bowling at the Shirley Senior Center. Mr. Cosenze’s family will receive relatives and friends at calling hours from 4-7 PM Monday, March 14, 2022 at the Anderson Funeral Home, 25 Fitchburg Road, (Rte 2A) Ayer. For additional information or to leave an online condolence, please visit their website at www.andersonfuneral.com. A funeral Mass will be celebrated 11 AM Tuesday, March 15th at St. Anthony’s Church, 14 Phoenix Street, Shirley. Spring burial will be in Village Cemetery. In lieu of flowers, donations should be made to St. Elizabeth’s Medical Center, 5th Floor ICU, American Legion Post 183, Shirley, MA or the Shirley Senior Center, 9 Parker Road, Shirley, MA 01464.

The family of Antonio P. Cosenze created this Life Tributes page to make it easy to share your memories.

Send flowers to the Cosenze family.