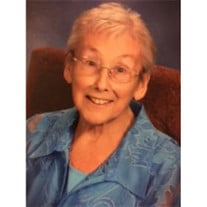 Ann was born in Fitchburg, July 28, 1931 the daughter of Frederick and Louise (Whitcomb) Tarbell and was a lifelong resident of Townsend. She leaves her three daughters, Sandi Lammi of Sieppijarvi, Finland, Vicki Brunelle of West Townsend, and Allison Lammi of Milford, NH. Also 2 grandsons who she adored, Nathan Brunelle of Winthrop and Jake Lammi of Milford, NH. She grew up in Townsend where she played basketball for and graduated from Spaulding Memorial High School in 1949. She married her husband Robert Lammi, who passed away in 2007, shortly after high school and began her teaching career shortly after her daughters entered elementary school. She taught in many of the local schools including the Townsend Community Kindergarten, Rinnah Nursery School in Leominster, Townsend Co-op Playschool which she helped start, Playmore Preschool, Pepperell’s Children Center, Rainbow Preschool & Daycare and most recently the Messiah Lutheran School in Fitchburg. When asked what she liked best about teaching she replied, “the children; they are very loving, very spontaneous and never dull!” She and her husband were very active in Townsend community as they were part of the Townsend Couples Club and they were co-chairpersons of the hugely successful 250th Townsend Anniversary Celebration Parade. She loved going to line dancing, swimming in her pool, vacationing at the beach, making cards and attending her church, the Messiah Lutheran Church where she made many deep connections to her friends there. She was an avid reader and supporter of the Townsend Public Library, the love of which she passed on to all her daughters. She enjoyed spending time with her grandsons and had a wonderful trip to Oregon to visit with her oldest grandson Nathan Brunelle in 2008. When he was a child they were avid moviegoers. She loved attending her youngest grandson’s sporting events especially his basketball games as basketball was a love of hers. She and Jake spent many hours watching basketball on TV together. She was loved by all who knew her and will be very much missed.

Ann was born in Fitchburg, July 28, 1931 the daughter of Frederick and Louise (Whitcomb) Tarbell and was a lifelong resident of Townsend. She leaves her three daughters, Sandi Lammi of Sieppijarvi, Finland, Vicki Brunelle of West Townsend,... View Obituary & Service Information

The family of Ann L. (Tarbell) Lammi created this Life Tributes page to make it easy to share your memories.

Send flowers to the Lammi family.