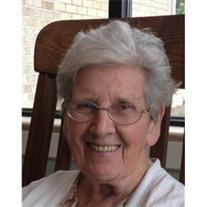 Born on April 20, 1924 to John and Helen Kane, she was a graduate of St. Bernard’s High School in Fitchburg. On April 6, 1953 Agnes married the love of her life, Richard “Sully” Sullivan of Ayer where they resided for over 65 years and raised their three children. While Agnes took great joy in many things, nothing brought her more joy than spending time with her family. A faithful journal writer, each day she would write of just how much her family meant to her. Whether it was a simple Sunday dinner, a dance recital or sporting event, summer days at Goose Rocks beach or one of her 25 cruises with Sully and extended family, Agnes treasured anything involving family times and documented it all. A true friend and source of strength to many, Agnes will be remembered for her ready smile and willingness to comfort those in need. Agnes was employed for over 25 years with New England Telephone/Verizon as a telephone operator and repair services clerk. After retiring, she was employed part time for several years at the Hazen Memorial Library in Shirley. Survivors include her daughter Paula Sullivan of Ayer, son Barry (Sandra) Sullivan of Hudson, NH and daughter Julie (Daniel) Sallet of Ayer. Also surviving are grandchildren Maegan (Keegan) Demers of Londonderry, NH, Austin (Brittney) Sullivan of Northboro, MA, Connor Sallet of Arlington VA, Patrick Sallet of Brighton, MA and Molly Sallet of Ayer and great-grandchildren Piper, Kane and Nora Demers. Agnes is also survived by her closest childhood friend Doris Cadrette and many nieces and nephews. Along with her parents, Agnes was predeceased by her husband in 2004 and her siblings, John and his wife Irene, Sister Mary Kane of the Maryknoll Missions, Joe and his wife Mary, Paul and his wife Beryl and Irene and her husband William Buchanan, her sister in law Barbara Sullivan Landry and her husband Christopher and nephews Alan and Kevin Landry. Her family wishes to thank Liz from Compassus Hospice and the North 2 staff at Apple Valley in Ayer, especially Jen, Amanda, Sam, Maureen, Laurie, Janelle, Winnie and Sheri. The kindness that they extended to Agnes and her entire family, particularly during her final week of life will never be forgotten.

The family of Agnes K. (Kane) Sullivan created this Life Tributes page to make it easy to share your memories.

Send flowers to the Sullivan family.