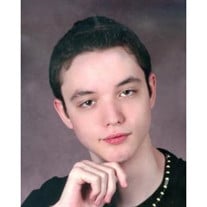 Adam was born in Cambridge, MA on June 15, 1991, the beloved son of Christopher and Sevasti (Loukas) Kepentzis and lifelong resident of Shirley, MA. Adam was a 2009 graduate of Lunenburg High School and attended Fitchburg State University. He... View Obituary & Service Information

The family of Adam C. Kepentzis created this Life Tributes page to make it easy to share your memories.

Send flowers to the Kepentzis family.